A woman has inherited two things from her parents: an ancient castle and a horrifying amount of debt. Shell have to sell the place if she can't find the money, but she has a plan: if she can tempt enough people to stay at Castle Spire, she might be able to save her ancestral home. But then one of her guests is murdered on the first night. This is, to put it mildly, really inconvenient. Now our heroine and her remaining guests are trapped in a castle with a killer, and they have no idea who it might be

Jennifer Atkins, intelligent, organized, resourceful, hotelier and owner of Castle Spire; hopes to use the income from guest bookings to pay off inherited debt; quick-thinking and resourceful; sceptical about paranormal matters; university-educated; eventually solves the murders and exposes the killer.

Daniel Carter, storyteller and alleged psychic; has known Jennifer for a long time; hired by Jennifer to entertain her guests; clashes with Christopher, who plans to expose his psychic abilities as fraudulent; plays a vital role in exposing the murderer.

Sarah King, television presenter (in partnership with Mike Young); pretending to be in a relationship with Mike Young; Jane Perez (incorrectly) suspects that she and Tim Perez are having an affair; works closely with Jennifer in an attempt to catch the murderer; second murder victim.

Pete Wilson, accountant; sarcastic; tends to poke fun at and rile up the other guests; accidental death; mistakenly thought to be the third murder victim.

Sybil Anderson, wife of Russell Anderson; like her husband, came to the castle as a prospective buyer and is convinced that the murders are staged.

Jane Perez, newlywed, on honeymoon with husband Tim Perez; mid-twenties; (incorrectly) suspects her husband of having an affair with Sarah King.

Arthur, minibus driver who transports the guests to Castle Spire.

Brent, Daniels friend and fellow psychic; exposed in the past as a fraud by Christopher and consequently imprisoned.

An enthralling story about a lady struggling with debts, a missing painting and the quest for a mysterious murderer.

An old castle situated remotely in the country

A flash of lightning accompanied the murder. It lay across the clouds like a split in the sky, and sprayed huge shadows of the room’s antique furniture, its windows and its one occupant, racing up the wall. It faded into nothingness as the first set of footsteps approached, heavy and urgent, on the old wooden floor of Castle Spire.
A door opened. Ancient hinges whined as they were forced into action. The steps slowed and halted in front of the body. Raindrops wriggled down the windows, dappling the inside of the room with strange blobs of shadow. A switch was flicked, and the room’s electric lamps fired into action. The cold greys and whites of the storm light were replaced with hazy orange. On the floor, the pool of blood that had looked black in the darkness was lit up crimson.

Jennifer Akins entered the room to find only Pete Wilson and Daniel Carter. Their faces were pale and Pete was shaking. Jennifer followed their gaze to the floor. A cry of alarm partially escaped her mouth before she could clap her hand across it. On the floor, face down, was a body. It was definitely male, judging from the size and the night robe, but Jennifer could not tell who it was. The body had fallen in such a way that the head was under a sofa.
“My God,” Jennifer whispered.
“We heard the shot,” Daniel said.
“Shots,” Pete corrected.
The two exchanged an uncertain glance, and from the corridor came the sound of more footsteps. Some of the other guests poured into the room; Jane Perez, Tim Perez, Russell Anderson, Mike Young and Sarah King. A second later, Alice Lee and Sybil Anderson arrived, completing the group.
For a moment the room rang with their screams and cries of alarm, like a choir of the damned performing a concert in hell itself. Slowly, the noise lowered and the room’s occupants were reduced to shaking or panicked breathing that made them grunt and snort like racehorses. Several of them were sobbing.
Daniel and Pete looked from the body up at Jennifer.
“Well,” Daniel said hoarsely. “At least we know who it is.”
Jennifer quickly scanned her assembled guests. Of course there was one missing, and she instantly spotted who that was.
Christopher Dupuis, the world-famous amateur detective, lay dead on her carpet.

The rain hammered on the windows, desperate to get in. In a few places it was succeeding. Jennifer had moved from one window to another three separate times to avoid being dripped on. Looking down across the castle grounds, she felt more like she was underwater, the rain was so heavy. She smiled to herself, as it seemed fitting. She could be a fish in her model castle. All that was needed now was some coral and a giant plastic diver. What a thing to put in a fish tank, Jennifer thought. She had had fish when she was young, with the traditional diver figurine in the tank. Her fish must have lived their short lives in a state of perpetual terror. It was like putting a plastic eagle in a hamster cage.
Outside, at the bottom of the gently sloping grass hill upon which sat Castle Spire, her ancestral home, the minibus that held the guests was crossing the bridge. The rain had been driving hard for several days now, and the river was already swelling over the bridge. The minibus rode behind a wave of water that travelled forward in an ever-expanding crescent until it broke against the bank. Any higher and they would be cut off. 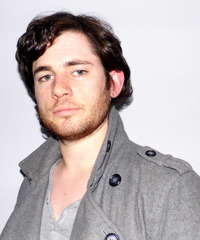