Egypt - that's where the heroine and her best friend want to practise their newly-acquired Arabic skills, and therefore they decide to spend their summer holiday in that myth-enshrouded country of marvellous temples, flamboyant bazaars, and mysterious tea-leaf readers . Their plan is to do a four-week language course and then go on an exciting Nile cruise to visit some of the most famous attractions the country offers. Yet when the girls, together with two of their friends, set out for the well-deserved journey at the end of their stay, unfortunate circumstances bring not only bumpy surprises but also a totally different kind of adventure from the one they expected. A fun story about friendship, coping with foreign cultures and customs, and surprisingly accurate love-prophecies.

The heroine and her best friend go on a trip to Egypt in order to practise their Arabic skills on-site and to have an exciting holiday. On their journey, however, they learn not only linguistic skills but also that things do not always turn out as planned.

Egypt (Cairo, Aswan) and a city to be named; a restaurant to be named.

Chloe Cunnings, 29 years old, a lively, bold, easy-going, smart, talkative and uncomplicated woman. Probably light-skinned (as she sunbathes in an effort to get a tan and ends up badly sunburnt); not particularly punctual or tidy; loves chocolate. Graduate in Linguistics and speaks several languages, but currently works as a cook at the Moroccan restaurant Laziz. She has a passion for Middle Eastern culture and takes Arabic lessons in her free time. She has been in some relationships, but none of them has ended up well, so she is single; first has a crush on her classmate Leonard, but finally falls in love with the Egyptian tour guide Salah.

Emily Adams, 30 years old. She is frequently anxious, claustrophobic in a crowd, overcautious, punctual, warm-hearted, with very high moral standards. Likes Indiana Jones; dislikes insects, lizards and Leonard. Graduate in Anthropology, but works as a history teacher in a secondary school. She has recently joined Arabic lessons with Chloe but is terrible at languages. She has not been in any serious relationship, is prophesied to marry an Egyptian and falls in love with Mario.

Mario Ozman, 28-year-old fellow student at the Arabic lessons, tall and good-looking, reserved and sensitive; a native Egyptian, but has been living in the UK since he was a baby; secretly in love with Emily; runs a small Egyptian food shop. He joins Chloe and Emily on their trip to Egypt and rescues them from an unfortunate situation.

Page Steward, Chloe's flatmate and friend, talkative, sceptical, a nurse and thus over-concerned with health issues regarding Chloe's trip to Egypt. Likes to give any kind of advice, whether required or not. Has a stable life; is in a relationship with Steven, who proposes while the others are in Egypt.

Leonard Pilkington, an attractive English guy in his thirties, recently employed by the British Council as a Regional Development Editor at their premises in Cairo. He has expensive taste, is arrogant yet charming; when it comes to the point, he is a coward; meets Chloe and the others at the language school in Cairo, which he joined in the hope of meeting women; tries to seduce Chloe when he realises she has a crush on him, but quick to set his sights elsewhere when she goes missing.

The tour guide/ the heroine's boyfriend

Salah el-Din, an Egyptian tour guide, tall, smoker, grumpy but warm-hearted. Initially has a very low opinion of Western women; however, this attitude changes when he meets Chloe. He does not show his feelings for her until the very end when he, together with Mario, saves Chloe and Emily from their unpleasant situation.

Saida Abdl Karim, Egyptian tea-leaf reader and landlady of Chloe and Emily's flat in Cairo; short, chubby, middle-aged. She is always sniffing around in their flat to check everything is in order. She prophesies that both Chloe and Emily shall marry an Egyptian.

The following characters are not personalised :

Nadia, Tim and Angela, pupils at the school in which Emily teaches.

Ahmed, a young camel-driver who attempts to touch Chloe's chest.

Mohammed, a man who invites the tour group into his home.

Noor, a woman who looks after Chloe and Emily when they are lost.

In the meanwhile, Emily was drifting through a vivid nightmare, where she embodied the Egyptian version of the Hamelin Piper and enchanted all the rats in Egypt with her music, guiding them towards the Great Pyramid of Giza, where she was supposed to lock them all up once and for all, so that they would not attack any tourist ever again. She was merrily playing the flute around the main chamber of the Pyramid, bursting with joy to see that she was the saviour of the Egyptian tourism business, when someone locked the gate, trapping her inside with zillions of very pissed-off-looking rats. She ran through narrow passages followed by thousands of rats, making the whole Pyramid shake, and shake, and shake… It was, however, a violent shake of the boat that made her wake up with a start.
When Emily sat up and took a look around, she thought she was still dreaming, despite the fact that there were no rats anywhere near. Instead, the murky water of the Nile and the endless dunes of the Sahara were the only things surrounding her. Besides, in her dream she had been a flute virtuoso with all ten deft digits rather than a miserable woman with a half-chewed and badly bandaged middle finger.
Unable to articulate any word, she started to shake Chloe by her shoulder until she woke up in yawns and reluctantly sat up, rubbing her eyes and grumbling something about what a pest of a friend Emily was for not letting her sleep a bit longer. It was not until Chloe eventually managed to open her eyes and found herself in the middle of the Nile without any trace of the felucca and the others that she stopped whinging and her mouth dropped open.
“What the hell…?!” she exclaimed as Emily kept on shaking her, as if in shock. “Emily, stop it!” she shouted, grabbing her by the arms and forcing her to focus on what she was saying. “Look at me, Emily! Are you OK?”
Emily nodded.
“You know what happened?” Chloe asked.
“What do you think happened?” Emily snapped, suddenly regaining lucidity. “The dickhead didn’t tie the thing properly and we drifted! That’s what happened! Why? Why did I ever listen to you two? ‘Don’t worry, Emily. It’s very safe, Emily’,” she said, mimicking Salah’s voice. “Safe, my arse!”
“Calm down, Emily, I don’t think he did it on purpose…”
“Well, that would certainly have been the last straw, wouldn’t it? But who knows anymore?”
“Oh, seriously? I mean, why would he do something like that? His job is at stake,” Chloe said.
“Oh yes, he can bet his arse it is,” replied Emily acidly.
“We both saw him tying it very tight and you yourself checked it a hundred times before going to sleep.” Chloe began hunting around the boat, trying to find an answer. She took the remaining part of the rope and called, “Look! It looks like it’s been cut or something.”
“Leonard!” Emily exclaimed.
“What?”
“The guy hates me.”
“Don’t be ridiculous—”
“Let me see.” Emily grabbed the rope from her hands and inspected it closely. “That doesn’t look like a cut, but more like it’s been gnawed at,” she said, and it suddenly hit her. “The rat!”
“Do you think so? I mean, why would it eat the rope if it had your fingers?” Chloe asked matter-of-factly, before realising what she had just said. “Er… sorry. Well, you know what I mean, right?”
“Yes, I know what you mean. And if you ever bothered to pay attention in your biology lessons back in school, you should know that the little bastards are rodents, which means that if they want to go on eating people’s fingers, they have to wear out their front teeth every now and then, because they never stop growing. The nasty little thing found the perfect toothbrush after its meal,” she explained, looking at her finger on the brink of tears.
“There, there.” Chloe stroked her head, trying to comfort her. “Let’s just think what to do now. Do you think there will be reception here?”
Emily looked daggers at her. “Well, if we had a mobile to start with, we could give it a try, but all our stuff is on the felucca or the boat to Luxor.”
“You’ve gotta be kidding me,” Chloe replied. She set off to look around the mattresses in search of any of their belongings. The only things they had with them, however, were the little handbags they had taken to the hospital, which contained not much more than their almost-empty wallets, their passports, and their insurance cards.
For a moment they both sat there, blankly contemplating the deserted landscape around them. The strong current that had jerked them awake some time before seemed to have weakened to the point where the boat appeared to be at a standstill right in the middle of the Nile. Nevertheless, trying to swim to one of the banks did not seem to be an option for either of them. Not only were the waters deep and murky, but also, from time to time, they could glimpse, out of the corners of their eyes, small eddies forming in the water. Although Mario had sworn blind that there were no crocodiles in the Nile, neither of them was willing to prove his theory. Additionally, reaching firm land was not likely to improve the situation, since, besides a couple of suspicious-looking bushes, there was nothing there other than sand and dust.

Morgan S. Mingot was born in Alcoi (Spain) in 1984 within a ‘very special’ family. Her passion for languages led her to work and study in different countries, such as: Germany, the UK, Estonia, Morocco, Tunisia, Sudan or Kenya. After graduating in Translation and Interpreting, Morgan has had the most varied jobs: from tour leading in the Middle East and the USA, to interpreting in international conferences, or assisting the UNHCR protection department in Sudan. Her first short novel was published by the Autonomus Government of Valencia in the book: Las mujeres cuentan. V Concurs Literari de Narrativa per a Dones (2005). Today, she works for a development agency in Kenya, while she writes for PersonalNOVEL and manages to keep alive a 2-year long-distance relationship. 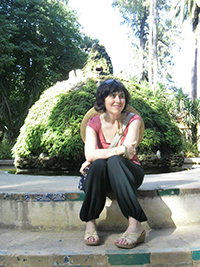